What is ESXi, and why is it awesome?

Familiar with VirtualBox or VMWare? It is the same thing in a much bigger scale, with alot more to customize and way more efficient

ESXi runs on Bare Metal meaning it is not using any OS. It is basicly just a kernel. When you boot up your server a Linux kernel is started first, and is then used to load a variety of specialized virtualization components. You controll the free version by browser or by downloading program called VMWare vSphere client. Best part is it can be totally free! In my experience both have its ups and downs. For instance, I fail to be able to upload files to my datastore(HD/HDD's I add to the server) using the browser. It also have a hard time being able to edit your virtual machines sometimes. It is not as easy as just using the vSphere client eater. You are restricked to using virtual machine version 8 IF you want to be able to edit it later. By edit I mean changing its memory/number of CPU cores etc. It also restrict what host OS support you want to pick i.e max Debian 6 or Linux kernel 2.6x. It dont mean they dont work, but they are not officially supported and might lack some features. If you want to controll your ESXi Server from a Linux machine or Mac you are stuck with browser controll. vSphere Client is Windows only. Below is a picture using the web browser 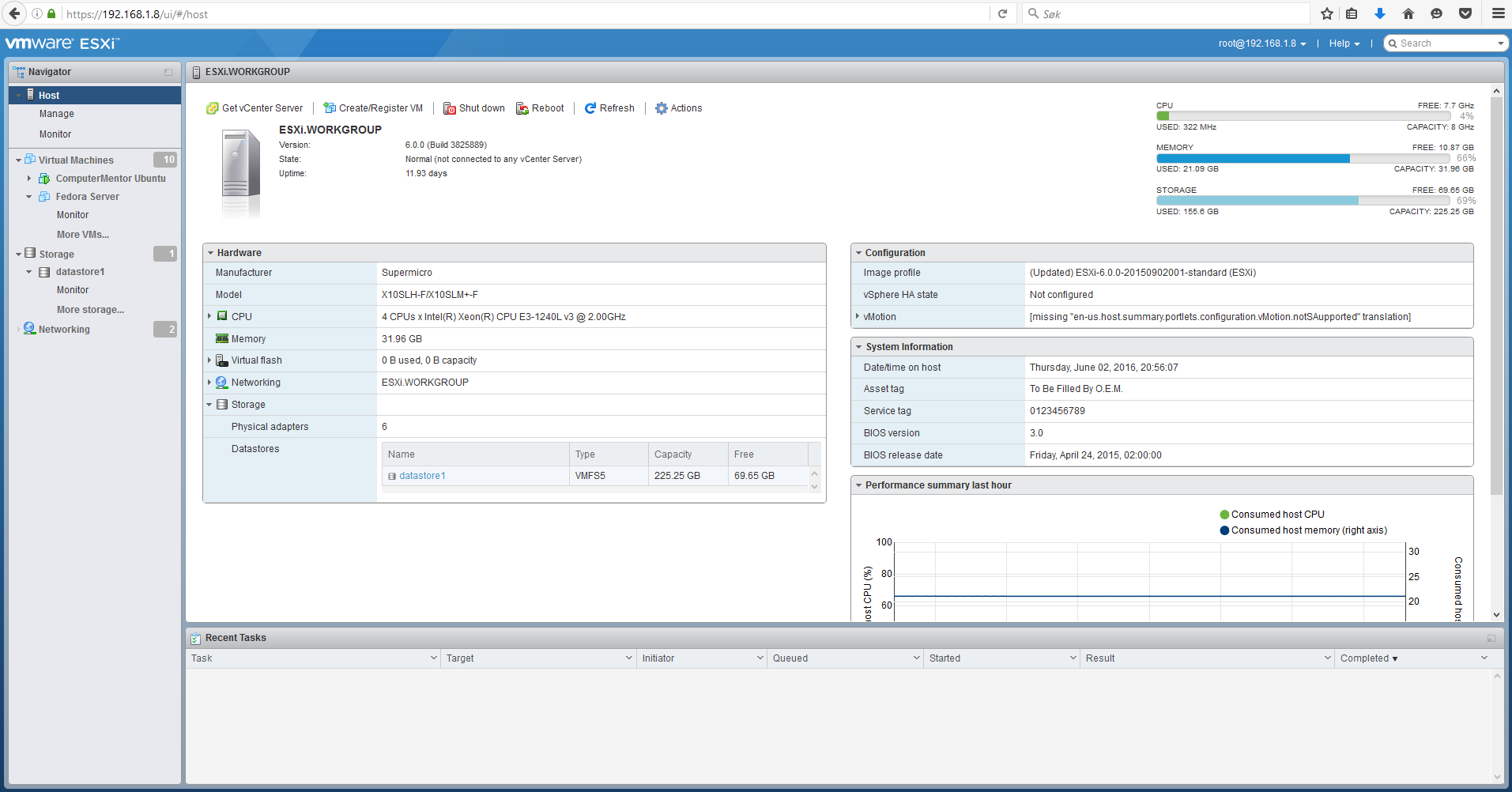 ECC ram is higely recommended as ESXi servers are intended to run for days and days. VT-x is Intel's technology to let the Linux kernel "take over" the CPU. Same for AMD-V, but for AMD prosessors. NX/XD is the motherboards support for letting ESXi take over. You need to be sure your motherboard have that support. Alot of motherboards who support CPU's with virtualisation support and ECC ram support, dont support the technology itself. Depending on what you want to do with your server just lurking right above the minimum system requirements is not recomended.

Now to the interesting part. What can you do with your shiny ESXi server? I use it as Plex server running on Ubuntu, testing different Linux distros, a Windows Server I have a RAID card on sharing over 12TB of data to my other virtual machines/laptop/Android. It is extremely usefull for creating guides as I can just take a snapshot pre guide, and reverse the machine to that point if I ever need to redo or is done. Snapshots take litterally seconds. All hidden in a small silent box under my TV bench. Was very selective and went for low watt CPU and a chase with lots of fans.

Some people have added a few graphic cards to a server and done a GPU passtrough created 2 mid/high end gaming PC's in one single box. Imagine having 1 or more gaming PC, 1 IDS, a few servers if you need and other computers on one motherboard. It make it cheap to upgrade hardware later as you upgrade everything if you upgrade the CPU or add memory. If you have thoose needs it is a kinda high entry expense, but it is nice later on.

Find more information and get the software at the official website